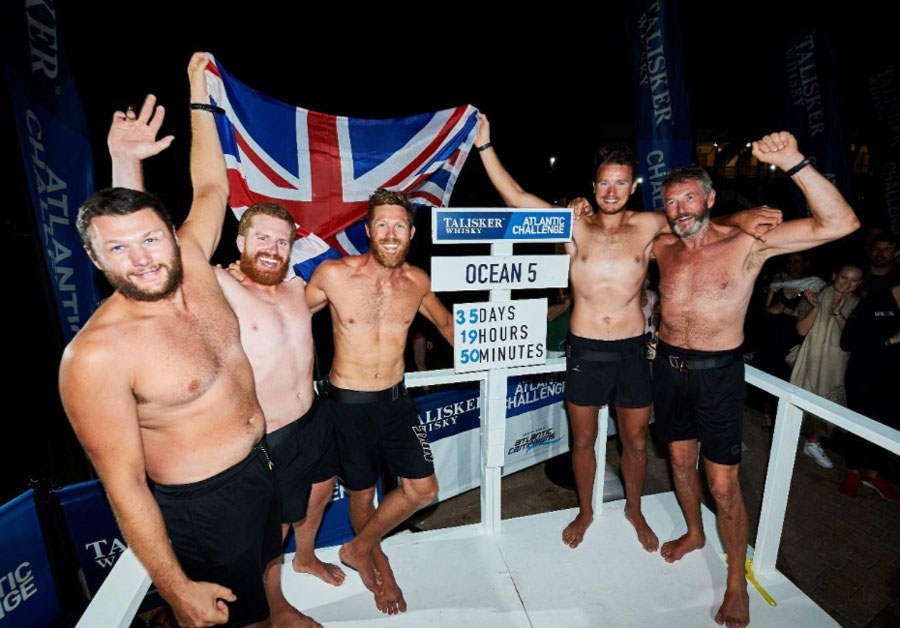 Kevin and his son Matthew, recently broke the world record as part of the fastest 5-man team to row across the Atlantic. The pair have been adventuring together since their first trip to the South Pole when Matt was just 17 – and they have no intention of stopping any time soon.

“Adventuring is something I’ve always done, although I wouldn’t always have called it that. I grew up in North Wales, so weekends as a teenager were spent hiking and climbing in Snowdonia. I gradually increased the scope of my adventures and then, when I was 40, I climbed to Everest base camp.

The accommodation was, let’s just say, basic – I mean, a tent would have been luxury! But it was the first time I’d seen mountains of that scale. You’d come out in the morning and look at these wonderful mountains. It was incredible. I decided I wanted to do more adventuring, and because I work for myself I’ve been fortunate enough to be able to take the time off between projects to do just that.

In 2004 my sister Jayne died, and I decided I would do another big trip to raise money for the Cancer Treatment Center in North Wales that had cared for her. I wasn’t sure what the trip should be. I was chatting to Vendee Globe sailor Pete Goss who is a friend of mine. Pete said that he had a plan to sail to the North Pole on a land yacht but wanted to walk there first to check out the terrain. He said, “We need some crazy people. Do you want to come?” And I said, “Yeah, I’d love to.” Alan Chambers MBE, the polar explorer, was the guide for the team.

Of course, if you walk to the North Pole, you don’t get back and say, “Well, that’s it. All done.” So when Alan said, “Why don’t we go to the South Pole as well?” I thought, “Why not?” And that’s when Matt, who must have been about 15 when we started planning the trip said, “Well, you’re not going without me this time.”

By the time we got the expedition together he was 17. I admit I was worried about whether he’d have the stamina. To be honest, I was worried whether I’d have the stamina! But in the end he was the strongest of all of us. I remember around day 10, we got to the end of the day and were completely knackered, and he was outside the tent building a snowman – in minus 40C! After that trip we went back to the North Pole together, so that he could see the difference in the geography, and we’ve been adventuring together ever since.

Probably the most enjoyable adventure together has been our most recent trip, rowing across the Atlantic and breaking the world record. I found it incredibly challenging. We were a team of 5 guys – I was 60 years old and the rest of the crew were in their late 20s. In terms of the fitness required it was incredibly tough. We were rowing 2 hours on, 2 hours off 24/7, for 36 days. Also, when you’re enclosed in a 20 foot rowing boat for six weeks, there’s nowhere to go. You can’t get off or even take a break. Everyone’s so tired and people can get grumpy. Being with people who you know you can get along with is really important.

Most of the time Matt and I get on very well but we’re actually quite different. I’m the emotional one. Something will cheese me off and I’ll go off with a big bang but 10 minutes later I’ve forgotten what I was annoyed about. He’s far more logical than me. He thinks situations through and stays calm. There were many challenges on the Atlantic crossing – including capsizing the boat mid ocean – but ultimately the team finished the race a) with a world record, b) winning our class, and c) as great friends.

It’s such a joy to have had all of these adventures with my son. I’m lucky to have a son and a daughter. My daughter doesn’t enjoy expeditions but we do skydive together. I always hoped that my son would come with me and share my interests. But I’ve never had to drag him. We enjoyed two trips where we walked and canoed across Scotland, one when he was 15, the second for his 18th birthday. I said to him, “What do you want for your 18th birthday?” And he said, “I’d like to do another trip across Scotland. This time I will plan it and lead it.” And I said, “That’s not a gift to you, that’s a gift to me because I get to spend a week with you on another adventure.”

I’m incredibly proud of Matt. I think he’s a fantastic guy. He’s one of the brightest blokes I’ve ever met. His IQ is off the scale. And honestly, he can achieve whatever he wants to do. So yeah, I’m completely proud of him and I enjoy his company hugely. He’s phenomenal. He really is. But don’t tell him I said that!”

“If Kev hadn’t done the things he’d done, I’m not sure that I would ever have started adventuring. It’s a lot easier to go and ask to be a part of a polar expedition than it is to set it up yourself, especially as a 16 or 17 year old.

I don’t think I ever saw him as an adventurer though, really. He was a businessman. He worked in an office. I know he went off into the mountains and then Everest base camp when I was about 10 and I remember that was a big trip. But it wasn’t until he did the North Pole that I saw that there was something to this, something I wanted to get involved in.

We were always an outdoorsy family doing activities like scuba diving or skiing – holiday style hobbies. But certainly we weren’t breaking rock climbing records when I was 10 years old. Nothing like that.

Our first adventure together was a camping hike across the Brecon Beacons when I was about 12. The first longer trip I remember us doing together, before the South Pole, was the canoe trip across Scotland when I was about 15. I think that definitely started a change in my relationship with Kev. I think everyone has a moment as they’re growing up where they see that their parents aren’t superheroes anymore, they’re real people. It was on that trip that I started to realise that he wasn’t just my dad, he was a man, with strengths and weaknesses, just like me. Once you realise that, I think maybe you have a different kind of relationship.

I was 17 when we went to the South Pole but I certainly didn’t feel as though I was too young to be in the team. I felt extremely lucky to have been given the opportunity. But beyond that, I was just part of the group. And Kev has always allowed me to be one of the team. Sometimes other team members don’t immediately realise that we’re related. It’s hard to say how I found the trip because I didn’t really have a frame of reference. It was just an incredible experience.

I’m definitely a person that likes to do things for a purpose. Where I think Kev is more focused on the memories or experiences, I like to be able to take something tangible away from a trip. That’s why for me the race across the Atlantic was probably my favourite trip, because of the fact that we set the world record together.

Doing something like that with a close member of your family has advantages and disadvantages compared to doing it with strangers or even people you only know a little bit. When conflict, or a crisis, happens, you know how the other person is going to react. You know how they’ve reacted in the past. So you can deal with that in a different way. Sometimes that familiarity helps, but sometimes it can be tougher.

But you also know exactly what skills they have and what experience they’ve got. You know what they can do without, what they find tough, or how they will approach a specific challenge without you having to ask or raise the issue. And that’s a definite advantage on a long expedition.

I’m glad I’ve had this opportunity to experience so much with Kev. I’d love to make a career out of adventuring and leading expeditions. That’s what I’m working towards. I want to help other people to experience the amazing adventures that I have enjoyed. Adventuring will always be a big part of my life. And I’m sure we’ll continue to go on trips together – we’ve got a couple we’re planning at the moment. I’m definitely proud of him. But don’t tell him I said that!”